What happens if we find an incoming impactor?

Asteroid 2008 TC3 was the first asteroid to be
discovered before it hit Earth.

Our immediate action will be to alert the Minor Planet Center (MPC), which is connected to Harvard University. The MPC quickly sends the information to several scientific groups around the world who calculate when and where the impact will take place. There are already systems in place between the MPC, NASA, and Jet Propulsion Laboratory (JPL) to report the information to national and international authorities.

Please note that ATLAS does not respond to the asteroid threat. It is simply the system that detects it. In the same way that geophysicists set up earth monitoring equipment to track earthquake activity and alert disaster relief agencies, ATLAS is a warning system to detect and report incoming asteroids.

What happens after ATLAS detects an incoming asteroid depends on two factors:

2) How much time there is before impact.

The bigger the object and the shorter the warning time, the more critical the situation. Currently, the most likely amount of warning time is between one and a few days.

In general, asteroids smaller than 50 meters (or yards) diameter will cause dramatic explosions high in the atmosphere (many tens of kilometers or miles) without causing significant damage on the ground, as was the case in the Chelybinsk event over Russia in February 2013. (This isn't always true, however, as illustrated by the Tunguska and Meteor Crater events but it's a good rule of thumb.) Considered "small" impactors, these asteroids are far more common than large ones and have about a 1 in 10 chance of happening this century. ATLAS will provide a few days warning for these impacts, which is enough time to evacuate the region and take measures to protect buildings and infrastructure.

For an asteroid in the 50 to 300-meters (or yards) diameter on a path to hit Earth, the response will depend on the impact location. An object on the high end of this size distribution that impacts land will be a major threat to life and property. If it lands in the ocean, the damage resulting from a tsunami may be equally devastating. It is worth noting that these bigger objects that are hundreds of meters (or yards) in diameter will typically be discovered many years or even decades before impact giving us time to develop an effective response, for example asteroid deflection.

Why we do not blow up an incoming asteroid?

The answer is simple.

Would you rather be hit by a bullet or by shrapnel? You might dodge a bullet. It's much more difficult to dodge shrapnel and every piece can be lethal.

Astronomers now believe it is possible to deflect an incoming asteroid so that it misses Earth.

Imagine the asteroid like a rifle bullet - except billions of times more massive and moving about a hundred times faster (the typical speed of an asteroid is about 30 km/s or about 20 miles second). A long-range rifle shot requires tremendous skill and must account for the motion of the target, gravity pulling the bullet downwards, the heartbeat of the person at the trigger, and even the wind speed and direction. The slightest change in wind speed or twitch of the trigger finger is the difference between a bull's-eye and a wide miss.

The same idea applies to an asteroid on a collision course with Earth. If we give the object a small nudge long before the predicted impact, we can make it miss the Earth entirely. The less time we have before impact the bigger the nudge has to be.

So how to nudge an asteroid? There are many ideas for how to do this ranging from whimsical (some might say comic) to the possible. Rather than describing them all here, there are several good sources for different options including Wikipedia and a summary of a study performed by one of our colleagues, Andrea Carusi, or by running this Google query.

One problem with deflection is that scientists can't really tell you its internal structure. Until recently we thought that asteroids were basically large chunks of rock. Now we think that most of them are flying piles of rubble held together by very weak gravity and the mechanical forces of just being packed together. Deflecting a big chunk of rock is different from deflecting a rubble pile. Imagine trying to deflect a basketball coming at you or a giant pillow. If you push the basketball away it will move in that direction but the pillow will merely reform its shape and keep coming at you. 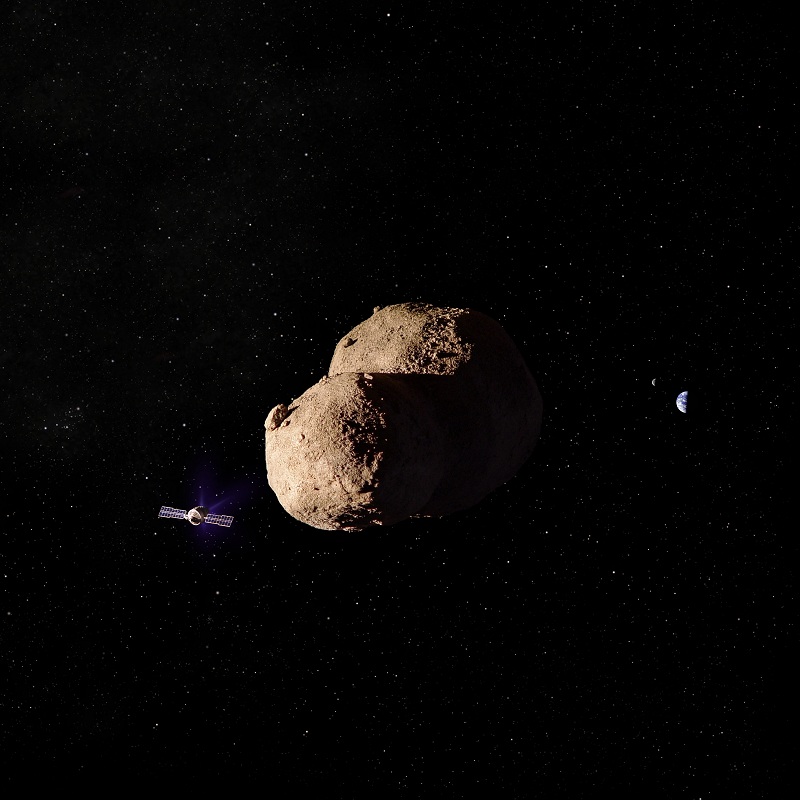 Since we can't know the internal structure of an asteroid without actually going to it (and the ATLAS team are somewhat anxious about launching conventional or nuclear weapons) we have a preference for a "gravitational tractor" (see left). This is not a gravitational tractor beam like that on "Star Trek." The B612 Foundation promoting the gravitational tractor is lobbying NASA and the government to demonstrate the technology of significantly deflecting an asteroid's trajectory. The ATLAS team likes the idea because it is non-explosive, uses a well-understood technology, is non-contact and therefore independent of the asteroid's internal structure.

Is it really possible? Has it been done before? 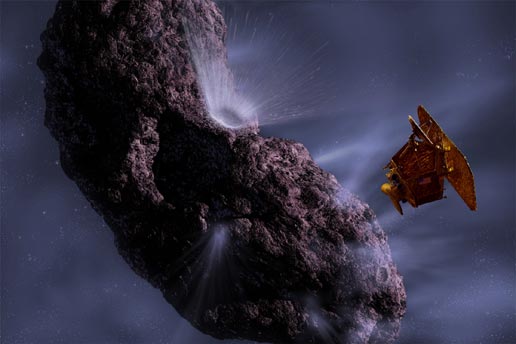 Artist's concept of the Deep Impact Spacecraft at
Comet Tempel 1.

Absolutely. Sending spacecraft to rendezvous with and orbit asteroids and comets has been done on numerous occasions like the Japanese Hayabusa (MUSES-C) mission and NASA's NEAR Shoemaker spacecraft. Both those missions touched down on their respective asteroids - Itokawa and Eros. NASA's Deep Impact spacecraft (see figure at left) actually slammed a dishwasher-size 370 kg (about 820 pounds) `smart impactor' made mostly of copper into Comet Tempel 1. Read about the mission on Wikipedia. Even though the comet took a direct hit at about 10 km/s (about 6 miles per second) from the NASA-made impactor, which left a crater on the surface, it did not have a significant effect on the orbit of the comet because it was still a very small nudge to a very large comet. The impact's energy was equivalent to nearly 5 tons of TNT! So to nudge an asteroid or comet off course will take a lot more energy.

So, even though an asteroid has yet to be be significantly nudged off course with a human-made object, we have demonstrated the ability to orbit and even hit an asteroid or comet with a spacecraft. Thus, the technology to build a gravitational tractor to deflect an incoming asteroid from hitting the Earth is within reality.

Rating the danger of a potential asteroid impact is different from rating earthquakes, tornadoes and hurricanes. We are familiar with the Richter scale for earthquakes, the Fujita scale for tornadoes, and the Saffir-Simpson scale for hurricanes. But all three of these rating systems measure the danger or intensity of a disaster that is or has already taken place - when all the data is in hand to measure its effects. Asteroid impact risk is more like predicting the future risk of earthquakes in California, tornadoes in Kansas, or hurricanes in Florida. Seismologists and meteorologists can predict the probability of these events but not the specifics.

To predict an asteroid impact depends on how well we know the object's orbit around the Sun and this (mostly) depends on how much time has elapsed between the first and last observation of the object. The longer the time span the better we know the orbit and the more confident we can be of calculating an impending impact.

With most asteroids we discover, we can establish quickly that they will not hit the Earth in many thousands to millions of years. But with some asteroids we know the orbit well enough only to predict the probability of impact, for example, at this time there is about a 1 in 1,700 chance that asteroid 2011 AG5 will hit the Earth on February 5, 2040, an unlikely danger. As we learn more about the asteroid's orbit we will re-run the calculations, refine the asteroid's trajectory, and determine that the Earth is safe.

If an asteroid is going to hit Earth, the amount of damage inflicted will depend on its mass and its speed. Bigger and/or faster objects pack more of a wallop. Scientists can be accurate when predicting the impact speed but it is harder to estimate its mass because we can't tell if it's mostly rock, mostly ice, or mostly space between chunks of either. 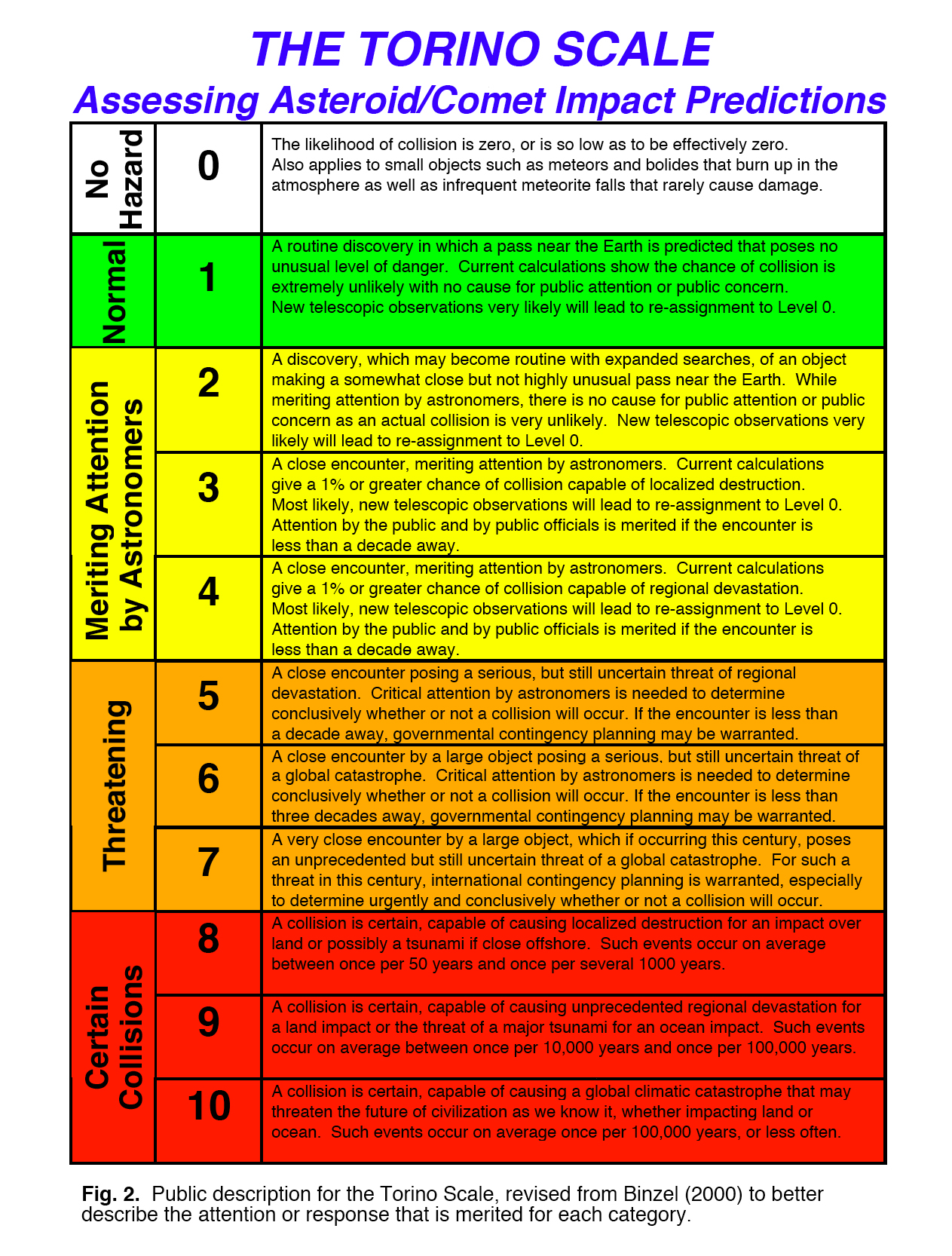