Other Cool Science with ATLAS

Two decades ago, astronomers believed that most stars have planets but not one extrasolar planet had been discovered. Today's advanced telescopes have uncovered over 1,000 extrasolar planets and the number is growing rapidly. Two primary methods are used to identify extrasolar planets: the back-and-forth motion of the star due to the orbiting planet and the slight dimming of the star as a planet passes in front. These detection techniques are biased in favor of giant planets like Jupiter that exist close to the parent star. The techniques are not well suited to detecting Earth-sized planets in the habitable zone - the range of distances from the star where life as we know it might thrive.

Only one or two of the 1,000 known planets might be habitable. And we have no means of determining if they actually are habitable (do they have water in liquid form, for example?) or of determining if life exists. Without a new approach, two decades from now we will know much more about how planets form and how common they are but nothing about whether any extrasolar planet is actually habitable.

ATLAS has a special capability to leap-frog the existing barriers in determining whether a planet is habitable because it will look at 10,000 white dwarf stars every night. White dwarf stars are the collapsed remnants of stars that have burned up their supply of nuclear fuel; our Sun will become a white dwarf in about 5 billion years. Although nuclear reactions in the center of the star have ceased, white dwarfs take up to 10 billion years to cool down. Prof. Eric Agol at the University of Washington has shown that the key ingredients to evolution of life are present in such systems (ApJ 713: 31, 2011) but it is unknown whether these white dwarf stars have planets and whether the planets could have liquid water necessary for life.

Detecting a habitable planet around a white dwarf is far easier than around a normal star because the collapsed star is nearly the same size as Earth. Here an extrasolar planet transit is a dramatic event - like a solar eclipse by the Moon. More important, the light that passes through the planet's atmosphere during eclipse can be a substantial fraction of all the light that we observe on Earth, even for partial eclipses (1% for a white dwarf versus 0.0001% for a normal star). In such an event, it's possible to detect strong molecular lines from oxygen and water during the brief eclipse using the world's largest telescopes or perhaps the future James Webb Space Telescope (JWST).

While astronomers think it is more plausible that a habitable planet would be found around normal, main-sequence stars, it is completely unknown whether white dwarf stars have planets. ATLAS is a way to find out. 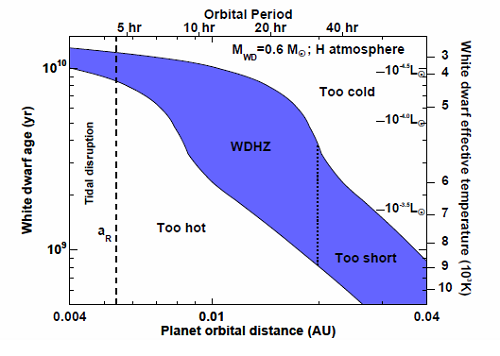 The habitable zone near a white dwarf star is shown shaded in blue
as a function of the white dwarf's age and distance from the star.