Hollywood movies love appointments with doom. Yet, civilization-ending asteroid impacts occur rarely - about once every 100 million years. Far more threatening are the smaller town- or country- "killers" (and the tsunamis they generate) that have continually hit us since the Earth was formed. ATLAS is designed to find them before they find us. 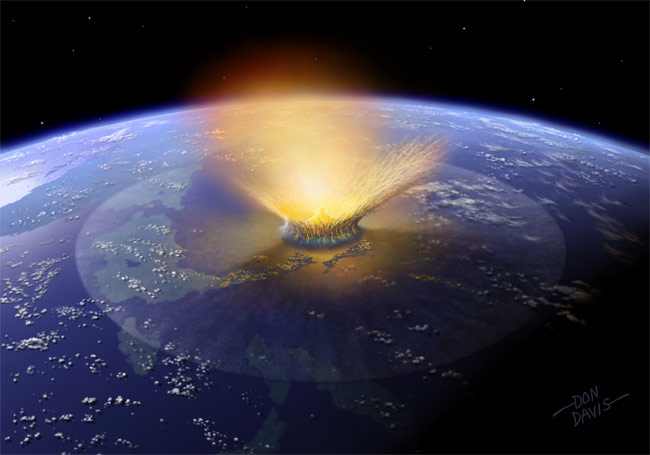 Artist's conception of the Chicxulub impact.

On the left is an artist's idea of what the meteor impact at Chicxulub, Mexico might have looked like 65 million years ago, an impact thought to have wiped out the dinosaurs. Scientists speculate the asteroid was six miles (10 km) wide, and that its powerful explosion released a million times more energy than a 100-megaton nuclear bomb.

Such an asteroid would have approached Earth 50 times faster than a jet aircraft with only a few seconds between being spotted and being vaporized. The explosion would have blasted vast amounts of super-hot material through the atmosphere and produced a circular shock wave that destroyed everything in its path; a 1,000-foot tsunami would have raced across the Caribbean. The explosion – hotter than the surface of the sun – together with falling molten rock would have started vast fires. Such an impact is thought to have devastated the Earth's ecology for decades, causing the downfall of the dinosaurs among other species.

Smaller impacts, yet big enough to destroy a major metropolitan area occur about once every 100 years. Such an impact – the Tunguska impact in Siberia happened about 103 years ago. No one saw it coming. Had this impact taken place over New York City, London or Tokyo it would have killed millions of people. Even though most impacts will occur over ocean or over remote and uninhabited areas, we should know of the danger in advance and be prepared. 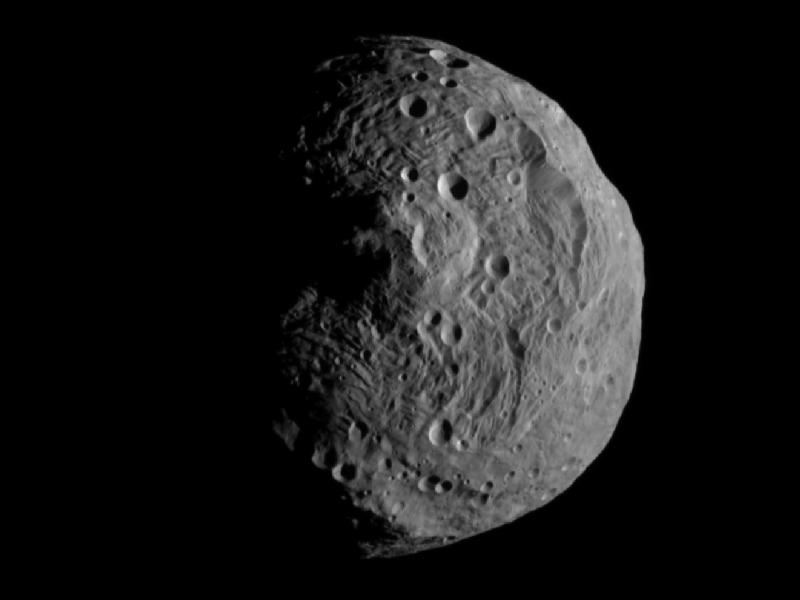 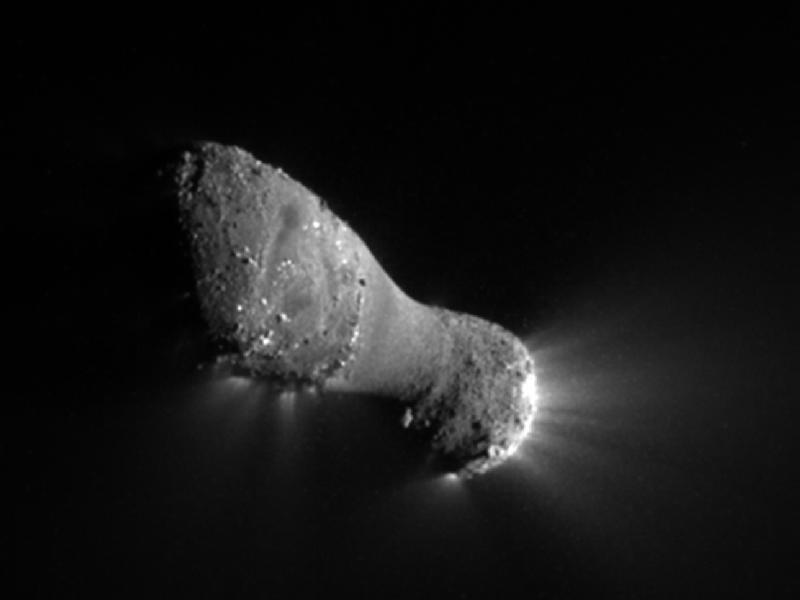 So what is an asteroid? Asteroids are chunks of rock that escaped the gravitational pull of the planets during the formation of the Solar System 4.6 billion years ago. Far from being idle, these bandit piles of rubble are in continuous evolution as they slam into one another, break apart, and re-accumulate into asteroids ranging in size and held loosely together by gravity and weak mechanical forces. Space inside these rubble piles can make up half their volume.

When this space is filled with ice or other volatiles we call the object a comet. However, comets tend to exist far from the Sun where it's cold. When a comet's orbit gets jostled so that it plunges close to the Sun, it can put on a spectacular show giving off a bright tail as the water and other volatiles stored inside warm up and evaporate.

Around 75 percent of asteroids are "chondrites" (C-type) that contain larger rocks made of pasted-together gravel. Of the remaining 25 percent, about two-thirds are "stony asteroids" (S-type) made from what we recognize as stones, and the final third are "metal asteroids" (M-type). These are blasted-off chunks from a larger body's interior that was hot enough to melt causing iron elements to settle to its center.

Predicting the damage caused by an asteroid's explosion on the ground depends on its size, its velocity, and its composition. Thus, the chondrites' more fragile gravel-like grains are less likely to survive passage through the Earth's atmosphere than stony or metal meteors. 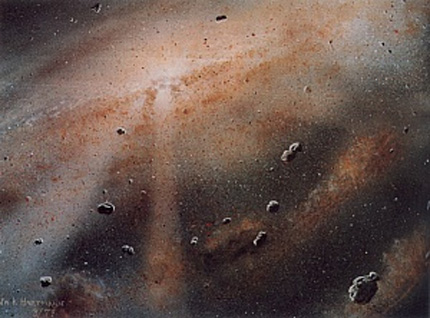 Artist's conception of a solar system in the process of formation. Asteroids and comets are left over remnants and fragments of larger objects from the formation of our solar system.

The Solar System formed about 4.5 billion years ago from a cloud that condensed into the Sun and formed a disk of gas and dust. Eventually, this disk condensed into clumps forming bigger and bigger bodies first by atomic forces and then by gravity. Planetary astronomers believe that during the early Solar System the young Earth sustained a massive collision and that most of the ejecta re-condensed to become the Moon. While remains of this bombardment are evident in the massive cratering of the Moon, the collision's substantial damage to Earth has been almost erased by plate tectonics and weathering. All planets were subjected to heavy, frequent bombardments that only let up when most of the space debris within the orbit of a planet had been consumed.

Not all the leftover debris was eliminated, however. The giant presence of Jupiter interfered with the collisions inside its orbit, and instead of a planet between Mars and Jupiter, we have an asteroid belt made up of thousands of rocks. These, too, can be jostled into new orbits far from their safe haven of 4 billion years, and it's only a matter of time before many of these space travelers collide with another planet, including Earth.

More information about close-passing asteroids is at Near Earth Object (NEO) site at the Jet Propulsion Laboratory (JPL). There are images of historical impact craters at the Lunar and Planetary Institute and a wealth of information available on Wikipedia and elsewhere on the web, such as this introduction written by Nick Strobel.